Abstract: Why is the zodiac counterclockwise on astrology charts? What is the Ascendant, really? Where is the Midheaven? The geometry of astrology is made clear with pictures. From the diagrams we can see why there is a problem constructing horoscopes at polar latitudes, and we can see that the Ascendant is the problem. 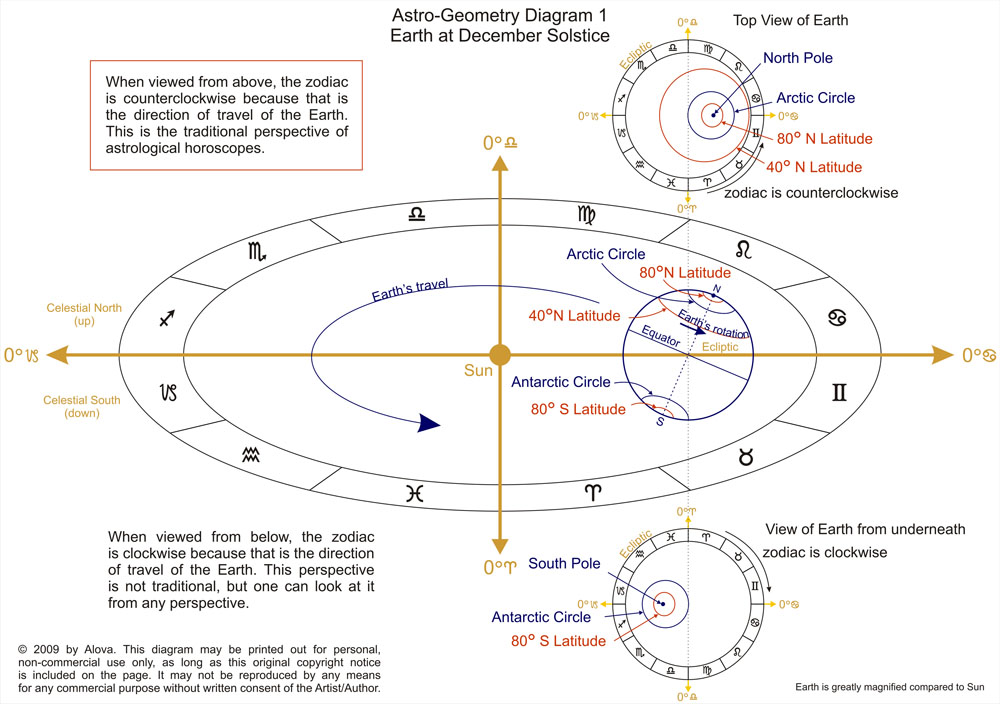 Click for a printable version of Diagram 1, then save

Diagram 2 shows how to find the Midheaven (MC) and Ascendant. The Midheaven is easiest to visualize. Find the Meridian, the great circle of longitude passing through the Place and the North Pole. The degree of the zodiac where it intersects the Ecliptic toward the South point of the Horizon (for a Celestial North location) is the Midheaven. If the Place is in the Celestial South at the time, then use the intersection toward the North point of the Horizon. The Midheaven is the same, independent of latitude, for all places at the same longitude. This is the usual definition.

For polar latitudes during summer and winter, the Midheaven can be below the Horizon. This occurs between 7:37 am and 4:25 pm in Diagrams 6 and 3, respectively. During this time, the path from the North Pole to the South point of the Horizon must go over (or under) the Earth to get to the Ecliptic. In these cases, there is more than 90° from the Place to the Midheaven, but the Midheaven is always toward the South (if it is in the Celestial North). Notice the symmetry: these times are equi-distant from high noon. There is an alternate definition of the Midheaven, in which the Midheaven is always above the Horizon, so it jumps 180° twice a day at polar latitudes during summer and winter. The definition used herein is the traditional one. 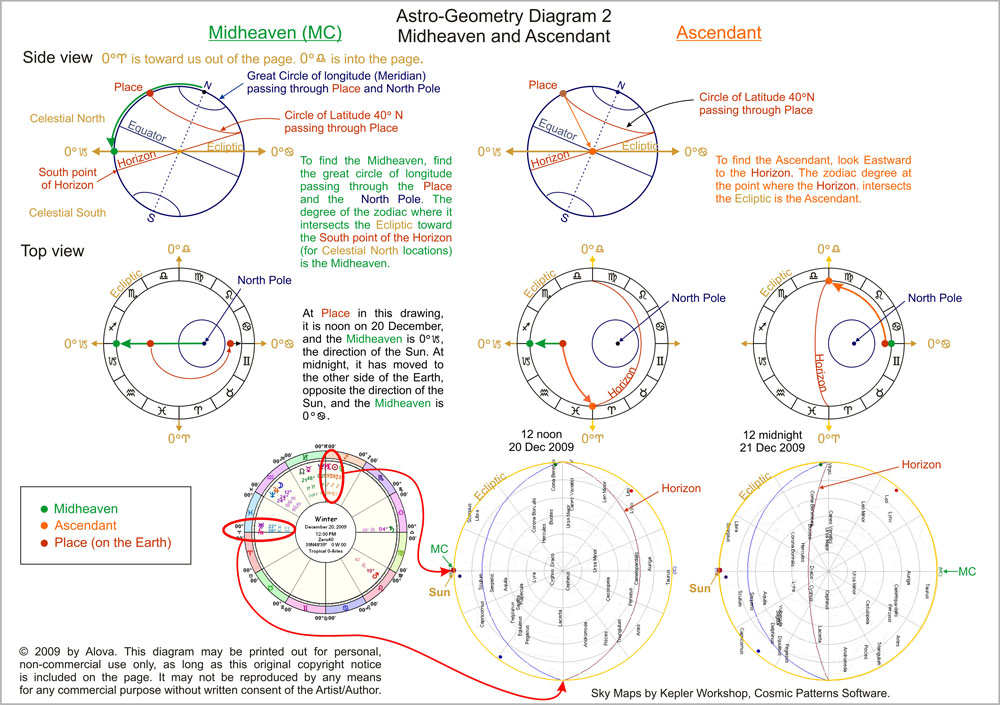 Click for a printable version of Diagram 2, then save

A solstice is a convenient time to visualize astrological points. At the December solstice, the Sun is in the direction of 0° Capricorn in the tropical zodiac. At noon, therefore, the Midheaven is at 0° Capricorn since we are facing the Sun, and the Ascendant, in the East, is at 0° Aries. The Midheaven and Sun are conjunct at 0° Capricorn in a horoscope. This is shown in Diagrams 2 and 3. Even if we are above the Arctic Circle and do not see the Sun, the Sun is toward 0° Capricorn and at noon we are closest to seeing its light.

At midnight, the Midheaven is at 0° Cancer, since at midnight we are facing directly away from the Sun. The Ascendant is 0° Libra. Diagrams 2 and 5 shows the pictures for midnight. For these two times, noon and midnight on a solstice, it is easy to imagine the Earth with Midheaven, Horizon, and Ascendant.

Diagrams 3 through 6 show what happens to the Midheaven, Horizon and Ascendant for a Place at 80° North, as the Earth turns throughout the 24-hour day. Notice in Diagram 3 that if the Place were below the Arctic Circle (at the same longitude and at North latitude), it would be on the left side of the Earth (the Capricorn side), and the upper portion of the Horizon would be on the right side (the Cancer side).

But remember—the Ascendant is defined by the Horizon. If the upper Horizon is confined to remain on one side of the Earth, the Ascendant also has to be confined. This is what happens. At polar latitudes during winter and summer, instead of progressing regularly forward through the zodiac like the Midheaven, the Ascendant moves slower and slower, then it actually conjuncts the Midheaven, and then it flips 180° to the other side. You can see this progression in Diagrams 3 and 6. At 7:36:38 am and 4:25:45 pm, the Midheaven and Ascendant are conjunct. The next second, the Ascendant jumps 180° from Pisces to Virgo as shown in Diagram 3, and from Libra to Aries as shown in Diagram 6. In three dimensions the planes are moving smoothly, but the point of intersection that we see on a horoscope jumps 180°.

This happens because, at polar latitudes, some degrees of the zodiac never rise or set during summer and winter, since they never intersect the horizon. This means that for several days (or months), the entire signs of Gemini-Cancer (and Sagittarius-Capricorn, or more) are always below (or above) the Horizon, never crossing it, 24 hours a day. 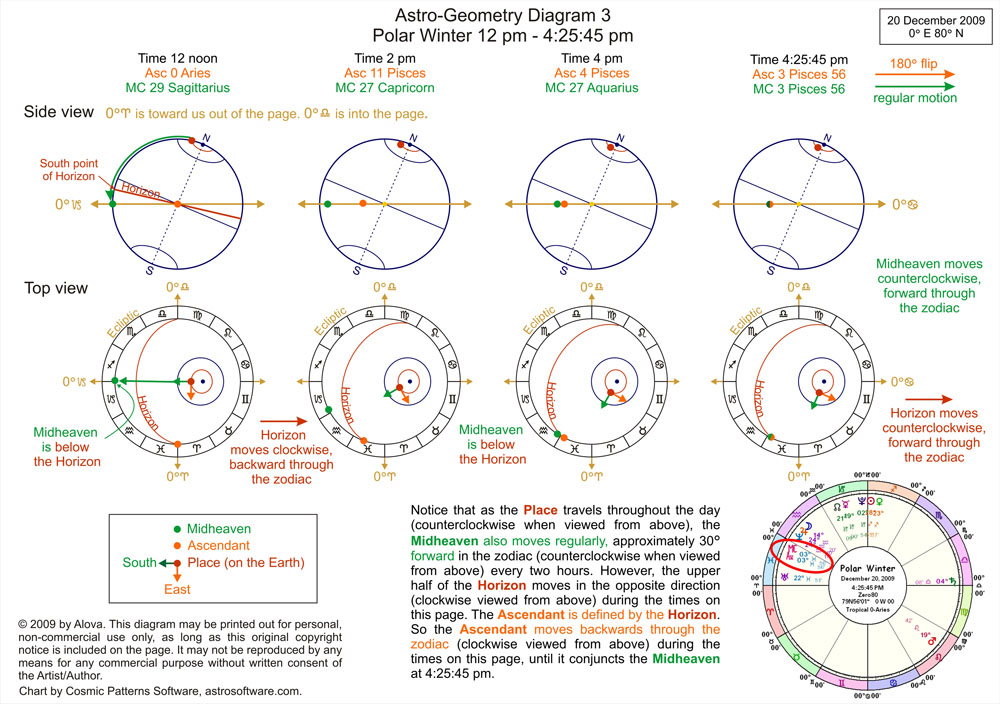 Click for a printable version of Diagram 3, then save 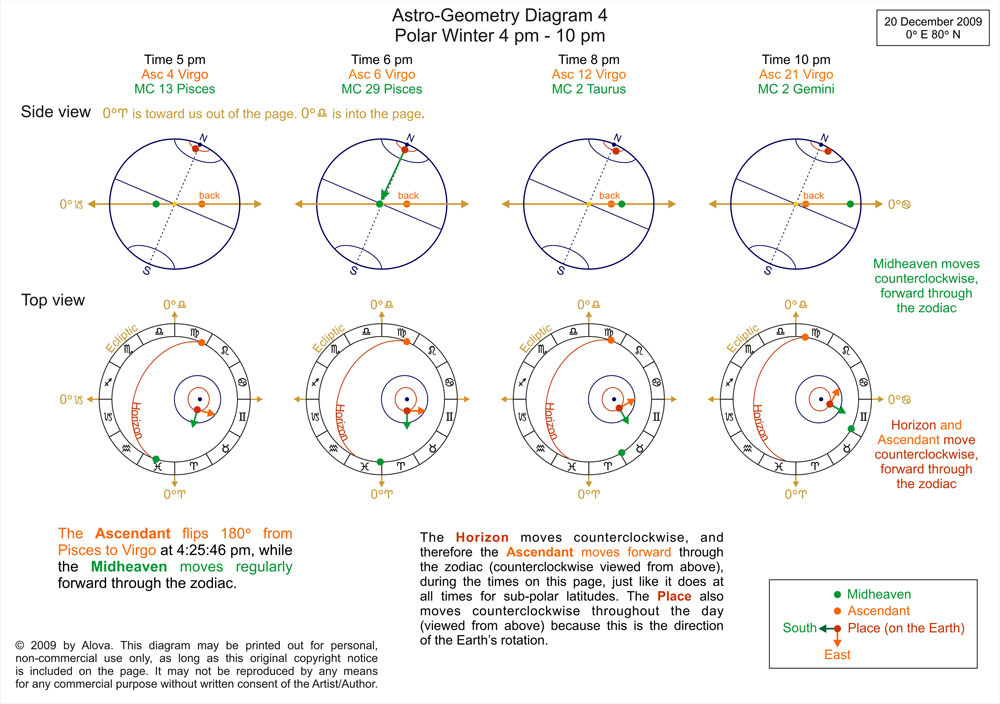 Click for a printable version of diagram 4, then save 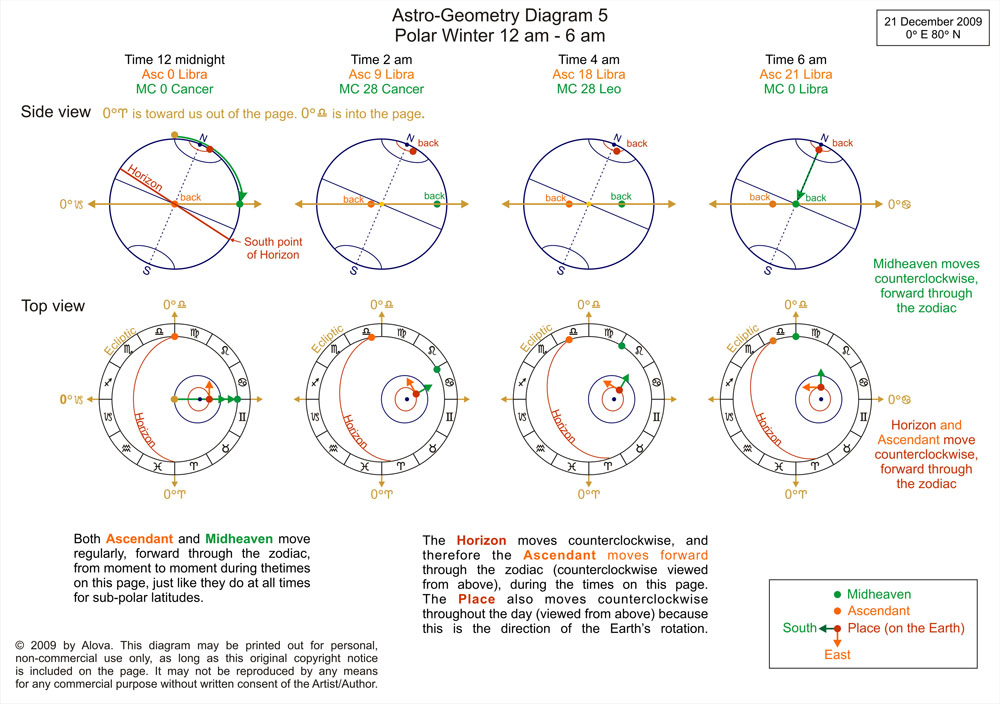 Click for a printable version of diagram 5, then save 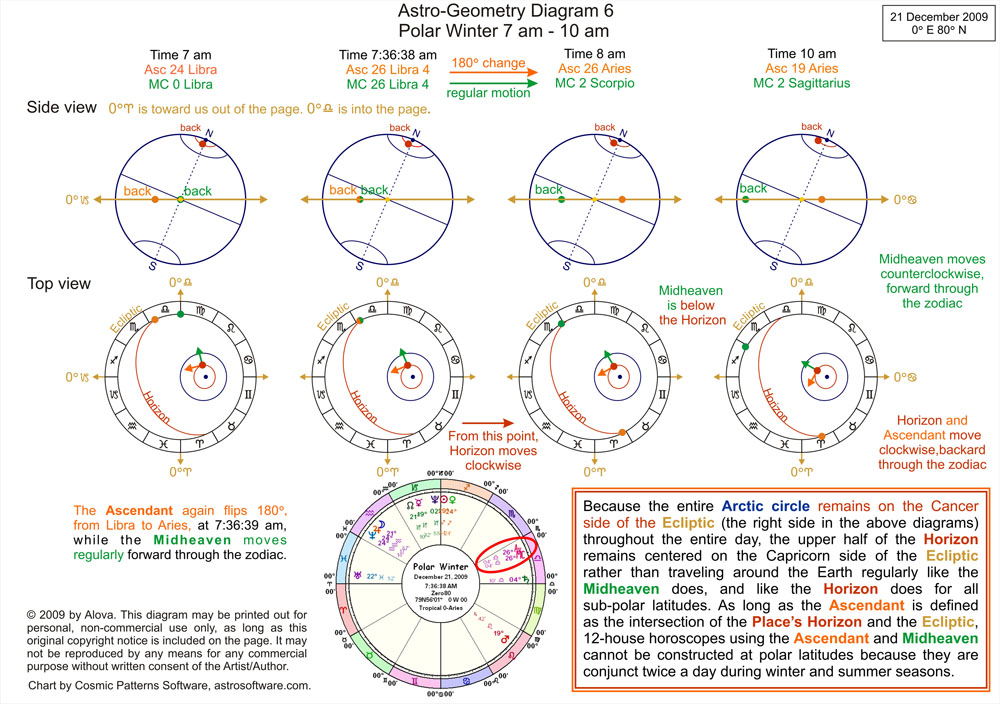 Click for a printable version of diagram 6, then save

This behavior of the astrological Ascendant is not mysterious—it is simply a consequence of the 23° tilt of the Earth, and of our definition of it. When we define the Ascendant as the intersection of the Eastern Horizon and the Ecliptic, this is what it does.

On solving the polar dilemma

Some proposals have been made to re-define the Midheaven, keeping it above the Horizon but not necessarily toward the South (or North). (1,2,3) This definition causes it to flip 180° twice a day, at the same time as the Ascendant does. The Midheaven and Ascendant are still conjunct twice a day, at which time there are only six (or four or two) houses. Then the zodiac reverses going clockwise in a horoscope chart, for a portion of the day. This means that we have suddenly shifted our perspective from above (North of) the Ecliptic to below, when the Midheaven and Ascendant are first conjunct (7:36:39 am in the diagrams). In other words, at our Place in the Arctic Circle, at 7:36:39 am, we would imagine ourselves as underneath the Ecliptic. Then in the afternoon at 4:25:45 pm, when the Ascendant and Midheaven are conjunct and flip 180° again, we would shift our perspective back to above the Ecliptic as usual.

This perspective is not totally illogical, but whether most astrologers would find it tenable is questionable. A horoscope wheel is designed to reflect one 24-hour day. In polar regions, why would we suddenly imagine, at 4:25 pm, that we are now upside-down? We still have 24-hour days, we still go around the North Pole in a circle, and we can still tell the direction of the Sun even if we can’t see it. Would we walk along and suddenly decide to look at the Ecliptic, our starry reference, upside-down for a few hours a day, and then switch back?

The background of stars is the very basis of astrology. Does it make sense to change our entire coordinate system to view it backwards, due to a local and temporary condition on the Earth, just because of definitions of Ascendant and Midheaven that were made up without considering polar latitudes?

More importantly, would it prove useful astrologically? What justification would there be, in ancient texts or modern, for such a radical change in perspective? How would we interpret it astrologically, symbolically, or metaphysically? When the Ascendant and Midheaven are conjunct and there are only six, four, or two houses, are certain arenas of life non-existent?

In working out a consistent astrological house system for all latitudes, approaches using spherical trigonometry alone have proved to be ineffective.(4) All the proposals that have been tried are not used much. There are now thousands of traditional Indian astrologers who use Placidus rather than the traditional Equal—because it frankly works better. All astrologers want an accurate and consistent house system, and most of us expected to find one based on spherical geometry alone. But there isn’t one, simply because the Earth is tilted. The house systems that work best astrologically use times other than the instant itself to construct intermediate house cusps.

Another point is that the further we are from the Ecliptic, the smaller the angle between the two great circles (Horizon and Ecliptic) whose intersection defines the Ascendant, and the harder it is in real life to pinpoint it in space or time. Have you ever tried to find the exact direction of sunrise at high latitudes in summer? It can be calculated, but it depends much more on exactly how we define "rise." High noon, by contrast, is unambiguous--it's the time with the shortest shadow, the midpoint between two equal shadows. It's much easier to pinpoint. The Ascendant is important, but at high latitudes it's "fuzzy."

Nature always humbles us—scientists, mathematicians and astrologers included. Most theoretical scientists seek to explain known experimental results; it is rare indeed for a theorist to actually predict physical phenomena. Let us not assume a priori that an astrological house system must suit a particular mathematical theory. In astrology, we have found that some celestial phenomena correspond with mundane conditions. These are the experimental results we must seek to explain with our mathematics.

1. Wilhelm, Ivan, Charts in Arctic Regions of the Earth, http://hem.bredband.net/ivawil/program/polar/index.htm. This article includes gorgeous (dare I say “stellar”?) 3-dimensional views of the Earth at polar latitudes, excellent explanations, and horoscopes using Alcabitus house system. At the times of day when the Ascendant is moving retrograde, the zodiac is clockwise, and the Midheaven flips 180° twice a day after it conjuncts the Ascendant. When the Ascendant and Midheaven are conjunct, there are only six houses in the horoscope.

2. Wackford, Michael, http://www.skyscript.co.uk/polar1.html. The first in this series of six technical articles shows charts with the zodiac going clockwise. The Placidus house system along with the alternate definition of the Midheaven is used. The articles include elaborate drawings, along with descriptions and evaluations of numerous house systems.

4. Alova, “An Astrological Dilemma: Polar Latitudes,” ISAR International Astrologer, Sagittarius 2009, p. 27-33, posted on www.astrosoftware.com/PolarDilemma.htm and www.astrowisdom.net/articles/astrological-dilemma-polar-latitudes.htm. Color versions of Diagrams 1 - 6 may be printed out for personal, non-commercial use only from www.astrosoftware.com/Astro-Geometry.htm and www.astrowisdom.net/articles/astro-geometry.htm.

Back to Articles
Home